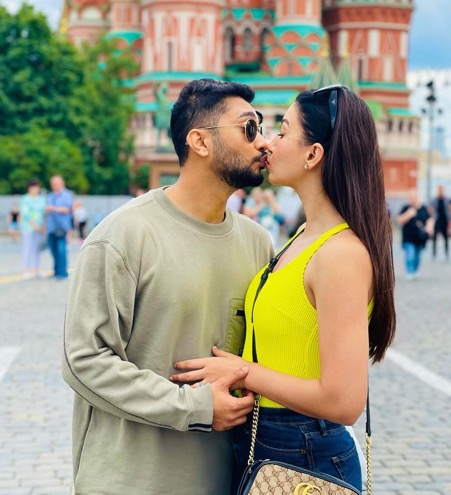 The advent of social media has taught people to live with impunity. Due to this impunity, these days the trend of expressing love to your partner on social media seems like a trend. Along with Bollywood celebs, many TV stars have also been seen kissing on social media expressing their love for their partner.

TV star Gauahar Khan went to Moscow after 7 months of her marriage with husband Zaid Darbar. As soon as they reached Moscow, the love-birds shared their romantic pictures on social media. In one picture, both were seen lip-locking each other in the middle of the road.

Ekta Kapoor’s show ‘Kutumb’ fame Hitez Tejwani and Gauri Pradhan, which aired on Sony Entertainment in 2003, are counted among the power couples of TV. Even though both of them got married in 2004, but the warmth of their relationship remains intact even today. Both have been publicly seen expressing their love for each other.

In 2020, Kamya Punjabi married for the second time with Shalabh Dong. During her wedding reception party, Kamya kissed her husband Shalabh Party and it did not take long for this picture to go viral.

The pair of ‘Yeh Saali Aashiqui’ fame actor Ruslaan Mumtaz and his wife Nirali Mehta are very famous on social media. The romantic chemistry of this couple is clearly visible in this picture.

Actor Ronit Roy, who proved his amazing performance in the TV and film world, was married in the year 2003. Even after years, Ronit’s love chemistry with wife Neelam Singh remains the same.

Iss Pyaar Ko Kya Naam Doon fame Sanaya Irani made a lot of headlines on social media by sharing this picture from her vacation with her husband Mohit Sehgal.

Aashka Goradia, who rose to fame as Kumud in Ekta Kapoor’s serial ‘Kusum’, seems to have a very good bonding with her husband and Brent Goble.

This picture of the serial ‘Meri Aashiqui Tumse Hi’ fame Smriti Khanna and her husband Gautam Gupta gives couple goals to the fans even today.

Even though Jennifer Winget and Karan Singh Grover’s relationship has broken up, fans have still not been able to remove this picture of their unfinished love story.

Ishita Dutta and Vatsal Seth have been continuously giving couple goals to the fans since their marriage. Their romantic pictures often go viral on social media.

The romantic bonding of TV serial ‘Madhubala’ fame Drishti Dhami and her husband Neeraj Khemka is quite strong. This picture of the TV couple had made a lot of headlines.

This picture of Shilpa Saklani, one of the most outspoken TV actresses with her husband Apoorva Agnihotri, went viral very fast.

‘Bigg Boss 14’ contestant Rubina Dilaik asked husband Abhinav Shukla to take care of himself after kissing him at the time of eviction from the ‘Bigg Boss’ house. This kiss of Rubina and Abhinav went viral very fast.

Anita Hassanandani and Rohit Reddy have been giving couple goals to their fans ever since they got married in the year 2013. Their love chemistry is often seen on social media.

Neha Kakkar married Rohanpreet in the year 2020. Their wedding pictures went viral. In a picture from their sangeet ceremony, the two were seen lip-locking while showering love on each other.