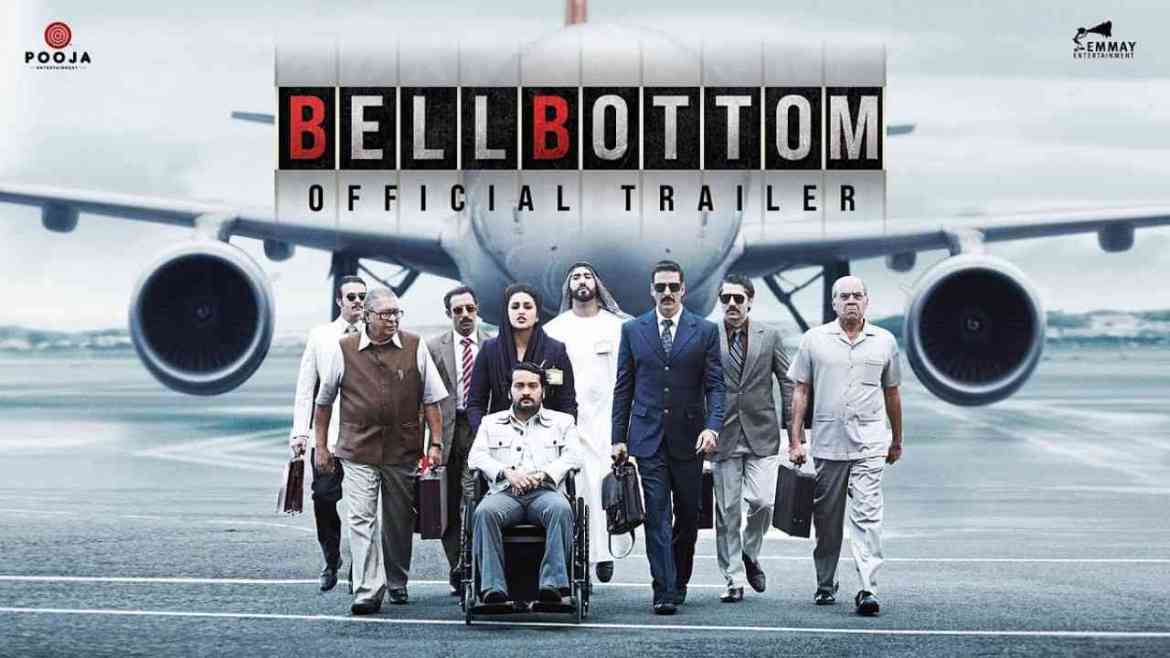 BellBottom movie review: Akshay Kumar’s film is a let-our-hair-down caper that embraces its joyful, carefree energy and transforms it into a worthy adventure for the big screen in these turbulent times.

After all, it’s for a good cause.
After the catastrophic second wave of the COVID-19 pandemic, BellBottom becomes the first major Bollywood film to hit theatres. It was also one of the first Indian films to begin filming during the outbreak. It takes place in the 1980s, amid the backdrop of a series of hijackings of Indian Airlines by anti-India groups.

This has to be a separate genre- the “Akshay Kumar” genre- where all other characters can literally laze on a hammock and that would have no bearing on the story because our man Akshay Kumar is the only one who can do anything of consequence anyway. Also, we know how such endeavours are destined to end – with a national anthem, Tricolor et al.

Couple of minutes set aside for Kumar’s entry, then Kumar’s dare devilry and since its on the big screen even the interval ad will have Kumar telling Nandu off and then ends with Kumar sorting the mess. There is just a lot of Akshay Kumar!

Here, too, he enters when his RAW boss (Adil Hussain) tells the Prime Minister “ek insaan hai jo case se judi har info de sakta hai”. On cue, Akshay Kumar slo-mo walks in wearing bell bottoms. The name of the film though refers to his code name because he, after all, is a secret agent.

However, what is not a secret is how good Bell Bottom i.e Anshul Malhotra is at everything. A chess player who can speak many languages, sings, has photographic memory and all but who is just “physical mein thoda peeche.” However, a song here and a montage there, Bell Bottom is rearing to go.

Director Ranjit M. Tewari presides over many flashbacks as there is a lot of back and forth from 1979 to 1984, then 1983 to set in context and show why Bell Bottom is so personally invested in high jacking cases. We get to know he is married but what we will never know is why Kumar and his onscreen mother (Dolly Ahluwalia) look “late 70s” enough but bahu Vani Kapoor jarringly remains very 2021 with her hair, makeup and trendy clothes. Mamik Singh from Jo Jeeta Wohi Sikandar comes in for a scene as Akshay’s on screen big brother.

Moving on, since it’s based on true events that have been fictionalized, we meet Lara Dutta who, with prosthetics and makeup and wig, plays Indira Gandhi so we never really ‘see’ her. A lot of media buzz was created about this “look” and I still don’t know if it made much of a difference. There is resemblance for sure but hardly any expressions, which in hindsight probably went in favour of Lara Dutta.

BTW, in that PM’s room is also RN Kao, the founder of RAW, played by Denzil Smith who is barely allowed a line in. (His story if you Google is so fascinating that a lot of BellBottom’s first half will pale in comparison).

Aseem Arora and Parveez Shaikh’s screenplay could have worked well as a gripping hostage drama but within the Akshay Kumar genre airspace it’s a high-jacked flight from start. Zain Khan Durrani is the principle villain, ISI highjacker who Bell Bottom must tackle. Durrani who we have seen previously in Kuchh Bheege Alfaaz and Shikara has a certain arresting presence. However, here predictably he is never allowed to threaten Kumar’s aura.

Huma Qureshi has an extended cameo appearance. Her character is the reason for a major twist towards the end and while she is competent, just like in the case of Adil Hussain. They all have their screen time cut out so that, no matter how good the actors are, we know they exist because Kumar needs to be propped up.

What the film also does is that it add dollops of praise for Dubai as the land where no innocents are killed; even an eagle is hit with a tranquilizer and not shot with a gun here, as Huma Qureshi explains in one scene. It’s odd but still okay.

However, things become conspicuous when such high praise is repeated multiple times in the film. What is with all this Dubai PR one wonders? The climax involves a bloodless fight with the hijackers while a sandstorm rages. It’s bloodless because “Dubai ke dharti mein khoon nahi baha sakte.” Yours truly saw this in 2D however its only my guess that the sandstorm might look a tad better on 3D. But what difference does it make?

BellBottom is yet another film in Akshay Kumar’s filmography where he yet again plays the perfect Indian on screen who can do no wrong as he saves other deshwasis. It is this template that eventually high jacks everything.